Recently I covered buffing carbon fiber pieces to remove light scratches and other minor blemishes restoring them to a “like new” condition. But what do you do when there’s real damage to a piece, like a chip? 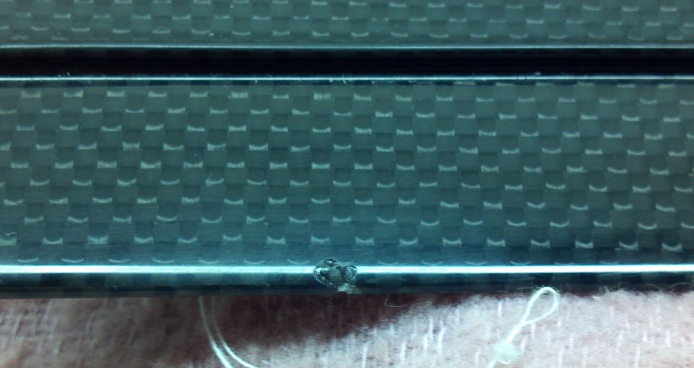 Luckily, with a little care and finesse, damage like this is repairable.

Repairing a chip like this is very similar to filling and sanding a dent on bodywork with Bondo. But instead of using opaque filler, clear resin is used to fill the chip.

It’s hard to tell what kind of resin the factory used when they made this CF part, but there are only two likely types it could have been – polyester or epoxy. Either one should work as filler as long as it’s clear, but you should take into account the amount of sunlight the piece sees. Generally, epoxy is not as UV resistant as polyester and turns cloudy over time; so it would not be a wise choice to use an epoxy on a hood unless it’s going to be painted. Epoxy is generally superior to polyester in every other way including less dimensional change (shrinking) when curing, so that might also be a factor.

For this project, I decided to go with an epoxy since this piece goes onto the vertical part of a dash board and doesn’t see much sunlight. There are generally two types of epoxy that you will find: the first is the adhesive type found at your local hardware store which is made to be used as glue. The second is the laminating type made for making fiber reinforced composites like this piece. The adhesive type will work, but you should do a test first to make sure it cures to the proper hardness. I did some tests with an adhesive epoxy I picked up locally and found that it cured much too soft to be used in this application.

Another difference between an adhesive and laminating epoxy is that an adhesive is generally much thicker and sticky than one made for laminating. The reason for this is that a laminating epoxy needs to wet-out (or soak into) a fiberglass or carbon fiber cloth, where an adhesive needs to hold things together. Because a laminating resin is so thin it may be difficult to work with since it will want to flow off the piece, but, this thinness will also flow into every nook and cranny of the chip which might help hide the seam between the repair and the piece. I used U.S. Composites 635 laminating epoxy with their 3-to-1 hardener for this project. I have used this resin for many years and have always been happy with it. I have also made dash board pieces using this epoxy and haven’t seen any yellowing or hazing, but I do know it will happen if it is exposed to UV rays for an extended amount of time.

The first order of business is to clean the area you’re going to repair. Be sure to use a cleaner that doesn’t leave a film. It’s also wise to use compressed air to dry the piece so that no fibers from a cloth or paper towel get caught in the jagged edges of the chip.

The next step is to mix the resin. It is important to mix the resin slowly to prevent making bubbles. Bubbles will affect the surface quality of the repair so do your best to prevent them. After mixing, I also let the resin sit for a little while so the bubbles had time to float to the top and get out. This also gets the curing process started and shortens the curing time when the resin is on the part.

I then applied the resin to the piece with my mixing stick. I simply let it drip off the end into the chip. 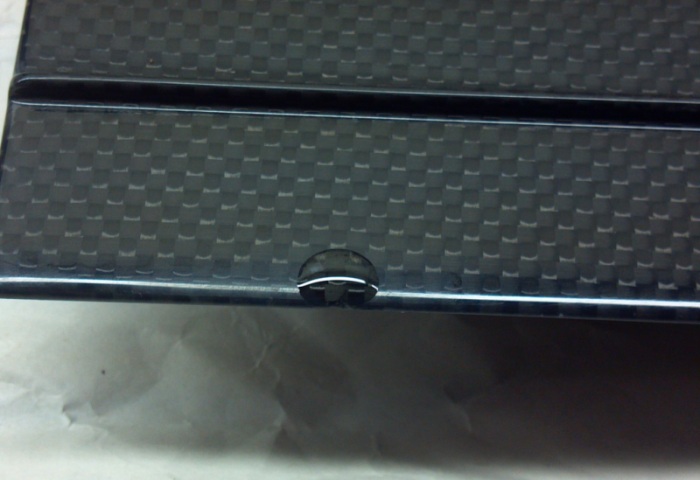 Both epoxy and polyester resins are exothermic during their curing reaction. Because of this, making such a small repair will take a lot longer to cure since there won’t be enough resin down to build any significant heat. I placed a light bulb near the repair to expedite the curing process.

While heat from the light bulb was being applied, I also rotated the piece to keep the resin where I wanted it as it began to sag. 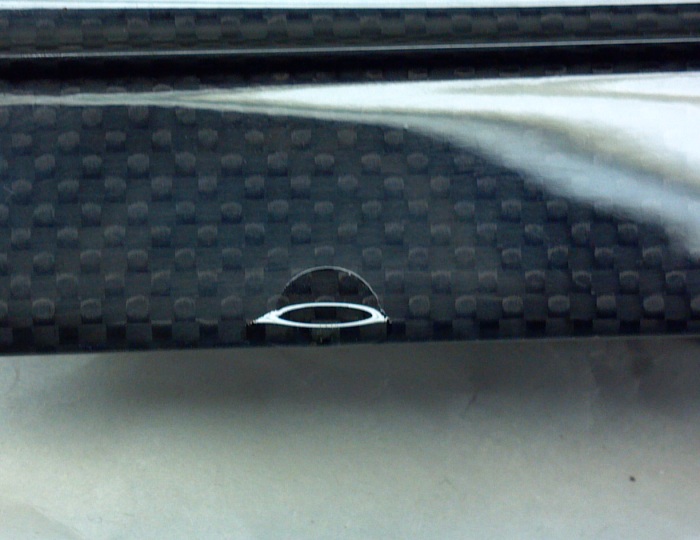 Eventually, the resin firmed up enough so it stayed in place. I then let the piece fully cure.

It’s best to start with your finest paper and then go down to rougher stuff as needed to prevent damaging the surrounding area. Return to the fine paper when you’re getting close. Since the piece is going to be buffed, you should only need to finish with about 1000 grit paper, but a higher grit wouldn’t hurt. Use a sanding block and sand in a direction that will be perpendicular to the direction of the buffing wheel. You don’t want to sand in the same direction as the buffing wheel because the buff will make the scratches the paper left deeper.

Once the piece is sanded with 1000 girt (or higher) and the repair is perfectly blended in with the rest of the piece and no more scratches are visible, it’s time to buff. I buffed this piece exactly the same way I did in my previous posting on Restoring Carbon Fiber Parts, so use that as a guide. Again, be sure to use a fresh wheel when buffing, otherwise you could damage the piece creating more work for yourself.

Here is the piece completed:

Plastics, like the coating on this carbon fiber, really can’t be repaired to the state they were in before the damage. This is because the molecular chains, which are nearly continuous in the unchipped piece, are broken at the site of the damage. These chains form during the chemical process of curing and cannot be repaired. Filling the chip with new resin like we did here mechanically bonds to jagged edges of the damage – that’s what actually holds the new resin in place. Because of this, it may be possible to see where the original resin ends and the repair begins. But, because the refractive index of the new resin is so close to the old, it is very hard to see.

When repairing plastic like this, the mechanical properties are better than before the repair, but are not as good as an undamaged piece. But for a show part like this, it really doesn’t matter.