When I was ready to start my freshly built engine for the first time using my Megasquirt II fuel injection system, I ran into some issues that I could not easily find answers for. One of the reasons for this was how incomplete and disorganized the information concerning the Megasquirt is. I hope that this post streamlines getting your engine started the first time with your new FI system, and not getting bogged down looking for answers to simple problems.

I have written this post for engines with a distributor since that is what I’m dealing with. Distributorless system can be a little more complicated to configure, but this is covered well in the megamanual. This post also assumes that you installed your Megasquirt yourself (so you know how everything is connected), you read as much as the manual as you can, you have everything installed and are pretty much ready to run and are using TunerStudio. I am obviously writing this for Megasquirt users, but this information probably applies to any E.F.I. system.

So let’s get started!

Ignition modules: I found that my aftermarket 8-pin HEI module needed to be wired differently than the factory GM unit. Mine needed 5 volts during cranking on one of the pins where the factory GM unit does not. If you find that you’re not getting any spark when cranking your engine, make sure your ignition module does not have special requirements.

MAP sensor sample angle: Nowhere in the Megamanual does it discus the importance of the MAP Sample Angle which is in the ‘General, Lags’ menu. If your map sample angle is not set correctly, your map reading will be completely wrong. I don’t know for certain what the actual logic is behind setting this, but I have an idea:

Typically, you set the map sample angle to the angle that’s perfectly between the throws of your crankshaft. For instance, a small block Chevy uses a 2-plane crank that has a 90 degree separation between its two throws. So, the map sample angle should be set to 45.  An inline 4 usually has a 180 degree crank, so then the sample angle should be set to 90. You should use these positions as a baseline because your intake duration (set by your camshaft) and Sample Window size also has an effect on this. The latest versions of the Megasquirts firmware has the default value set for V8′s, the default setting is 40 degrees and the sample window to 10. This places the middle of the sample window exactly at 45 degrees because the sample would start at 40 and end at 50. I think the reason we want the map sample to happen between the throws of the crank is to avoid the pressure wave that forms in the runners/manifold when the intake valves close.

Base ignition table: Be careful running any ignition table that was given to you or made from some sort of table generator unless you have a really good understanding of how much spark your engine likes. If you are going to use an online table generator to create your base table, I would back it down 10 to 15 degrees before taking it out on the road or revving it though the rpm range. Your fuel map affects how much timing you can have, and since your fuel map is not going to be tuned, having the timing advanced anywhere near where it will be when everything is tuned correctly is probably going to cause detonation.

Trigger angle/Offset (Ignition offset angle): This is not described very well in the manual. What this is supposed to be is where the input trigger signal occurs in the rotation of the engine. For an engine with a distributor, I believe this retards the timing. So, if the actual timing of the engine is zero degrees, by entering a Trigger angle/offset of 10 degrees, the computer will think that the true zero of the engine is 10 degrees before top dead center. This sounds strange, but I believe this is done so that the rotor in the cap is in closer proximity to the post when we start advancing the timing. If we didn’t do this, when the timing is advanced to 36 degrees at full power, the rotor would be so far away from the post that ignition would be difficult. For engines with distributors, you have to enter this offset before setting the timing. If the offset is entered after timing has been set in the computer, it will throw it off.

Finally, one last note: if it’s been more than 10 minutes and you haven’t been able to get the engine started, most likely something else is wrong. As long as you have fuel, air and spark, something should happen.

If you have a distributor and you don’t know how to set the initial timing on a non-running engine to get it in the ball park, read this.

If you are using a distributor with some sort of electronic control like GM’s HEI, you should not have to disconnect the electronic control from the ignition for your first start. This is because you can go into the ‘More Ignition Settings’ menu under ‘Basic Setup’ and select ‘Fixed Timing’ from the ‘Fixed Advance’ drop down. This will disable the ignition table and use whatever value you specify in the ‘Timing for fixed Advance (degrees)’ window. The default timing is usually 10 degrees and the Megamanual says that’s usually enough for most engines, but you should know that if you have an aggressive cam with a rough idle, you will probably need much more advance to get started. For example, my engine won’t run at all below 14 degrees.

For your first start, I recommend setting the actual timing on the engine (the physical distributor cap) to zero degree and setting the timing in the ‘Fixed Advance’ window in the MS to zero as well. Make sure you have the MS set to “Use Fixed Advance” and also set the Trigger angle/Offset to whatever is recommended for your engine/ignition system (i.e. 10 degrees for my engine). When you start the engine, you will then rotate the distributor cap by hand and advancing the timing while turning over the engine until you get it to fire. Do not worry about setting your timing correctly at this time in the MS, lets just get the engine started first. This is how you would fire a carbureted engine as well.

Once you get the engine started by manually advancing the timing by turning the distributor, you will want to play with the fuel settings so its idling well. Once its running pretty good, using a timing light, you will read where the engine is actually timed.

Now, we will want to transfer the timing control to the ECU. So, because we set the ‘Fixed timing’ to zero in the MS, the MS thinks that the engine is running at zero degrees. Of course this is not true since you manually advanced the distributor. What we want to do is take the timing reading observed with the timing light, and put it into that ‘Fixed Advance’ window in the MS. You do this while the engine is off, and you manually retard the distributor to something you feel is less than your observed timing. When you start the engine again, you will manually advance the distributor, again, until it fires. This time, you should not have to rotate it as much because the computer is now advancing the timing. You then use your timing light and rotate the distributor until the timing matches whatever you put in the ‘Fixed Timing’ window.

Lets say that the engine is idling at 17 degrees, we can enter that number in the idle rpm range of your ignition table. After that is set, we can go back to the ‘More Ignition Options’ menu and select ‘Use Table’ from the ‘Fixed Advance’ drop down. This tells the computer to use the table. 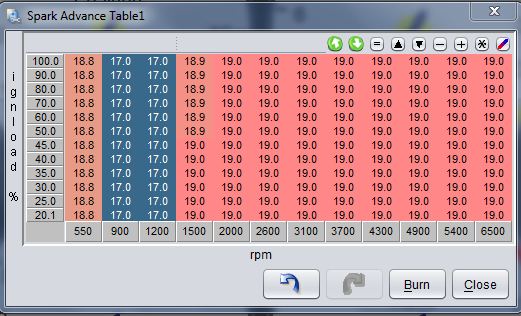 This is just an example of where you would put your timing for idling. If this was your ignition map, would probably want to edit a column and put something lower than 900 and 1200 for idle. Also, when setting your timing for idle, try to use the lowest amount of timing possible for smooth idle; then at a column a few hundred rpm below your target idle speed set the timing a little higher. This way, if your engine stumbles or drops rpm, the increased timing in the lower rpm cells will try to increase the engine speed back to the proper rpm.

Remember; don’t worry about setting the timing in the computer until you have it idling well. I hope this helps you get on the road.