I recently picked up  Shift 2 UNLEASHED off of steam for $15 during a sale. I have the previous title which I thought was a solid and fun racing game even though it had exaggerated physics. This new game improves on the old game quite a bit, but suffers its own problems. Even still, its a very fun game and I would recommend it to any sim racer. 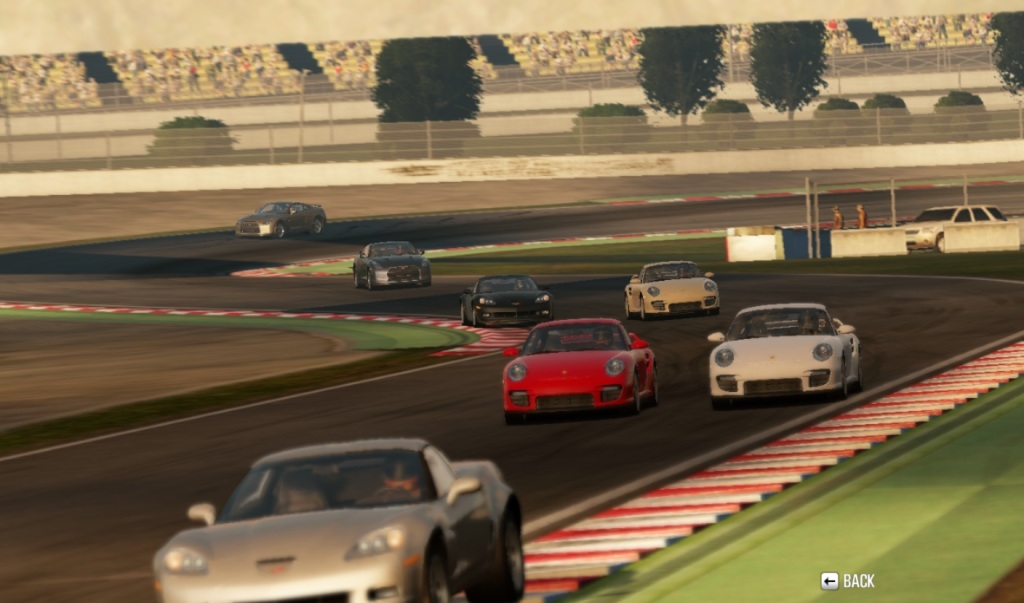 Since I’m playing this on the PC, my experience might be a little different than those who play it on a console. Right away the game makes it known that its ported to the computer on a budget, and its easy to see that the menu system was never designed to work with a mouse. All of the menus are designed to be scrolled through with a directional pad and clicking with the mouse was obviously an after thought and feels cumbersome. The overall design of the layout is good, but just doesn’t feel right on the PC.

But enough about all that and onto the game itself. I have developed cars from scratch for other PC racing games, namely rFactor. There is development tools available that allow you to extract the cars out of this game and look at how the cars are configured. Although I did not do this with Shift 2, I did with Shift 1 and it is obvious that this game is built off of Shift 1’s model. The Shift series uses a model very similar to that of rFactor, which in turn is similar to a lot of other sims. If you are a longtime sim racer, you probably have seen cars from one game show up in another in the form of a user created mod. This common architecture makes this all possible. Because of these commonalities, I don’t think EA developed this model in-house; they probably are just licensing this from one of the other established sim companies.

In Shift 1, some of the cars where darn near unplayable do to them not being setup properly. The model this game uses is very much like a real car; and much like a real car, if your springs aren’t stiff enough to keep your car off the ground, its going to scrape. That’s how poorly some of the previous cars were modeled. It seemed as if EA did not fully understand the model they had and focused mostly on creating good graphics.

This time around, the cars are are modeled better. I haven’t ran into a car yet that feels unfinished. Though at times I think the tire model still needs work. Some cars more than others feel floaty and unstable, like your driving on wrinkle wall drag slicks. I notice the longitudinal traction of the tires on some cars was much too high making it virtually impossible to over power them coming out of a corner. Other cars (a different tire model?) feel like your on ice and allow the car to drift 90° off center while still allowing for an easy recovery. Very fun to drive, but not so realistic. I also noticed that there is quite a delay from when you input a movement and when the car reacts. You get use to it and don’t really notice it after a while, but its a little annoying at first.

A really neat feature in this game is the ability the tune the car while your testing it. By simply hitting escape in tune mode, you can open the tuning menu and make changes on the fly. This is a really cool feature that I have never seen in a game before and makes tuning a snap. On the down side, the adjustments used for tuning is not in any real units. So when you try to adjust your camber, you just have some meaningless number that has no real world reference. For instance, your camber might be set to 18… whatever that means. This makes tuning a guess and check affair which is a little disappointing, but they do give you a reference to a zero.

The AI in the game is OK. I found that they are pretty good in most areas of a track, but I can usually beat them under heavy braking. They also try to avoid contact which is unlike the previous game where they tried to ram you off the track. The previous game also rewarded the player for crashing, which thankfully has been removed from this title.

There is a great selection of tracks from the real world in the game. Many I’m not very familiar with. This becomes a problem in the career mode which throws you right into a race and leaves you guessing where the track leads. This game really needs the traditional race weekend layout – practice, qualifiying and then the race. It just isn’t fun racing on an unknown track. They do have a feature that shows the line of the track, but I found that I do better without it because if I have that feature turned on, I tend to rely on it too much and never learn the track.

Another down side to not qualifying and being thrown directly into a race is this: since your probably going to be the fastest car on the track (usually not by much!); and because they start you in last place, it means that your going to end up passing a lot of cars dangerously on the first turn. There is some races which have you matched very well against the competition, this unfortunately makes this ‘mass passing’ maneuver a necessity if you ever want to beat the lead car. I don’t like this because it comes down to luck in passing that slow group cleanly. Often you just end up in a crash and have to restart the race.

The graphics of this game are fantastic. EA spent a lot of time with the art and visuals that went into this game and I can’t believe that they modeled the cockpits of all the cars. When I was driving the FC RX-7, it brought back fond memories of my old RX-7 that I use race back in the day. The tracks and environments are also modeled equally as well. Because of this, your going to need a pretty powerful system to push this game with the detail maxed out. My AMD Phenom II 955 and GeFroce GTX 280 is probably the lowest hardware that can push this game and still keep it looking good. Even so, every now and then I sense a frame rate dip. I think its safe to say right now, at the time of publishing this review, this is the best looking race game on the market. 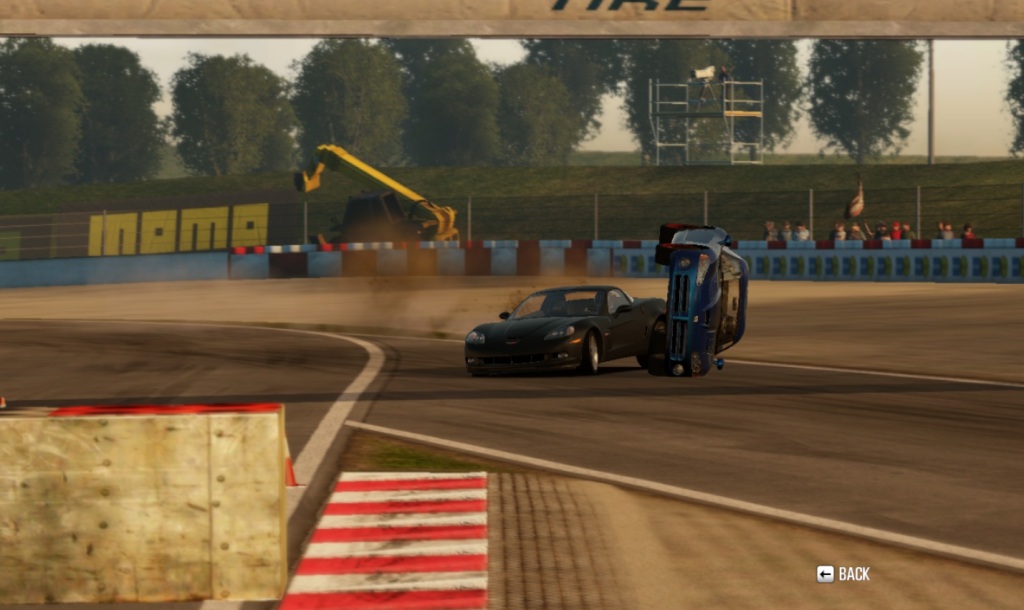 After a long race against this lead car, the AI driver went unusually slow through a bend catching me off guard ending the race in disaster….

This game is a lot of fun and I really like it. This disappoints me because no one seems to own this game and I want to play it online. When I try to find an online game, there is usually no games available! EA should have allowed the PC players to play with the console players for this title. Yes, I understand that us PC players have the power to cheat; but since there’s so few PC players to begin with, they should have let it go this time. Having no one to play with is a shame because they made a much nicer matchmaking setup compared to the old game. They now allow you to browse for games; before, you just were thrown into something at random.

That about covers it for Shift 2. The bottom line is that this is a solid racing game that’s a lot of fun. Its also serious enough that you will need a wheel and pedal setup to take full advantage of the game. So go out and get Shift 2, I need someone to play against online!

My version of the game is 1.0.2.0 I hope these issues will be fixed in coming patches.

After playing this game more, I have found that there are quite a few bugs that need to be addressed. I finally was able to find people to play with online. During that game, I noticed a massive error in which the opponents cars flip and tumble around on the track. The other drivers told me that this happens a lot, but not all the time. For me, it happened in every game I played. This didn’t stop the race, but this error is huge and never should have made it to the finished game. I later found out that the version of the game I got off of Steam is no longer supported by EA since they came out with their own online game distribution system. There is a newer version of the game out and breaks compatibility, but people with the older version are still able to play. This is a huge problem compounded by the fact that EA said they will not release any more patches of the game over steam. If you did buy the game over steam, it is possible to open up one of the game files and get the license key out. This will allow you to download EA’s distribution software, Origin, and enter the key there. You can then play the latest version and online without trouble… That is if anyone else is playing.

In my initial review I said that of the cars I played, there were none that seemed unfinished. I take that back. I still haven’t driven all of the cars yet, but the Radical SR (you can see the car here if your not familiar) is executed very terribly. The car is nearly impossible to drive in a straight line and is not responsive to tuning. I believe the reason for this is because the tires for this car, are again, not configured properly. I have seen what it takes to setup tires for these games and I must admit that its quite intimidating and difficult. Without a proper understanding of the model, it can be nearly impossible to get them right. This tells me that the Shift team does not understand the physics model they have.

There is other problems with the game, but these two are huge and never should have made it to the finished game. Still, for what it is, its a very fun game that could have been great. I sense that in the future, there is going to be very few racing games no matter how good they are since the market is already saturated with very established big time players – Gran Turismo, Forza, iRacing and rFactor. There is simply no room for the Shift series.