I’ve been looking at some of the new kit cars like the SL-C and some of the 917 replicas out there and wondered about alternative engine options. The choice that most people go with is a Chevy v8, but it would be nice to have something a little more exotic – especially for the 917 which was originally equipped with a flat 12. Doing some research into alternate engines seems to lead to a disappointing conclusion.

After a look around to see whats out there, I found some people where using the old M70 BMW v12 in their Cobra and Lamborghini replicas. The M70 was found in the BMW 750 and 850 models from 1988 through 1996 and can be had very affordably. The engine is somewhat interesting in that it uses 2 valves per cylinder and has single overhead cams. This is interesting because by this time, virtually all other engines had gone to 4 valves per cylinder and dohc. For this post, I have chosen to analyze this engine because a v12 is about exotic as it gets and can be a real show stopper. But the issues with this motor can be applied to any engine that’s out of the ordinary.

The architecture of the engine is stout and very well engineered and served as the base for the v12 found in the old Mclaren F1. Though, comparing the factory BMW v12 to the Mclaren built one is not really possible since Mclaren cast their own version of the block and so on.

Everything about the engine looks good until you look at the performance numbers. The M70 produced an anemic 295hp but a solid 330ft/lbs of torque from its 5 liters. Clearly, smooth operation and stout torque to move those large 7 series BMW’s was the primary design goal of this engine. 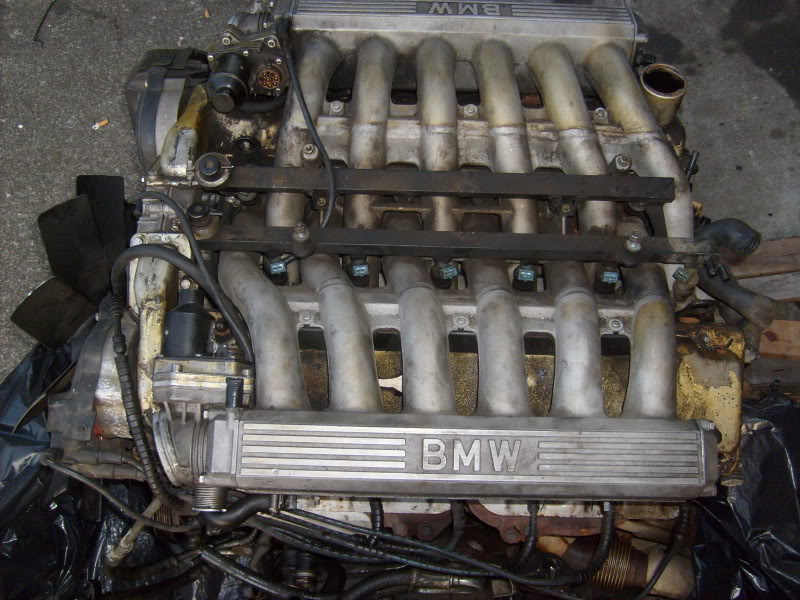 Its obvious that to make this a high performance engine, a lot of work is going to have to be done to free up some horse power. By looking at the intake manifold, you can tell that this is not going to be an easy task. Those long skinny intake runners are definitely designed for low rpm torque, and the ports they connect to are going to be equally as tight. To make power at high rpm, these ports have to be opened up and and the runners are going to have to be revised.

Unfortunately, the heads on this engine seem to have very limited porting capacity and can only be opened up so much before going into the water jackets. They just didn’t design these heads to have much room for improvement. This is the problem when trying to make power from any typical modern engine – the heads just don’t flow.

Aftermarket support for the M70 is very weak, but I did find some companies that offered performance cams and head work. And I did find one company that seems to specialize in this engine, that company is Power Plant out of North Carolina. Power Plant’s result of trying to get some power out of the M70 looks like this:

A very nice looking engine and intake system indeed, but even though the displacement of this engine has been increased to 5.5 liters, its only putting out 450hp for about 80hp per liter – pretty low for today’s standards. The price for all this work? Well, looking on their website at the various engine packages they offer, it looks something like this would cost around $27,000! The price to performance ratio is pretty low considering the v8 alternatives.

You may think that that a v12 like this commands a higher price because, well, its a v12 and requires a lot more parts than say a v6. But, you may find that trying to get power from the v6 to be close to the cost of the v12 just because everything is custom.

There is always the forced induction option; but typically, you really can’t boost an engine too much on stock internals. That brings us back to getting, at least, expensive custom pistons and rods. I am also not a fan of forced induction due to the added complexity and weight it brings.

So while it is possible to make more horsepower from pretty much any engine, expect to pay a bundle if you leave the mainstream. It can be disappointing after you have sunk thousands of dollars in your project to find that you could get the same horse power from a chevy v8 for less than half the cost.