Last fall, I took my project car to a tuner to have it tuned on a dyno. I learned quite a few things during the process that I think anyone interested in getting a tune should know before going. Armed with this knowledge, you will be able to maximize your time with the tuner and get a better result. 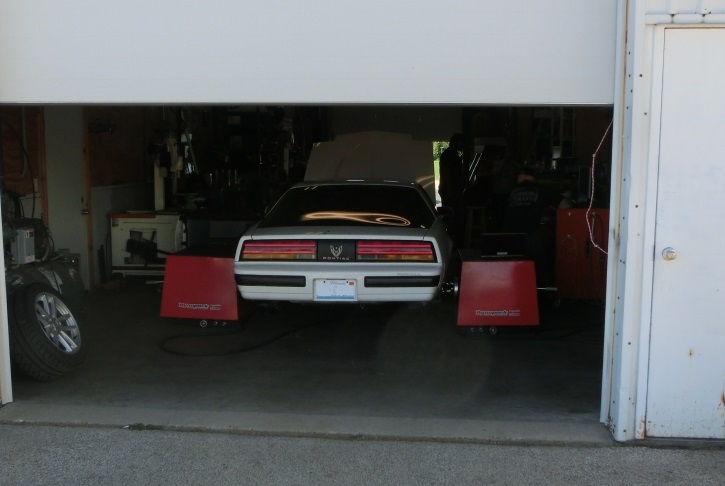 The type of dyno I was on was a Dynapack Dyno which is compact and doesn’t use rollers.

First, some things you should know about tuners.

From the standpoint of a race shop, tuning must be viewed as a necessary evil. Dyno’s are expensive pieces of equipment that require a level of skill and understanding to run correctly. Yet, the dyno itself isn’t really a big money maker for the shop. A good dyno might cost $25k, and then might have to be installed flush with the ground which costs even more. Yet, most shops charge less than $200 per-hour for a tune. Further evidence that shops think dyno tuning is a necessary evil is that many of them don’t even have an in-house tuner; you will find that many shops have a consultant that comes in and tunes for them. Tuning on a dyno is typically not the primary money maker for a lot of shops, doing custom work and selling parts is. But, this is where the necessary evil comes in – shops need the dyno to prove their work and make it run correctly.

If you were to ask me ‘what do I think of tuners in general?’ I would answer that they are flaky and finding one that actually knows what he’s doing is virtually impossible. Finding someone to even look at your car might be difficult depending on what you have. I want to be clear that I am only speculating on the reasons behind this, but I think the reasons for this are:

Also, during the summer months when everyone is getting their projects running, there is a high demand for dyno time. Tuners can pick and choose what they want to tune; because of this, and if you have something exotic, they will most likely not want to talk with you. I found this to be the case with me. Even though my engine is hardly exotic, having a stand-alone Megasquirt system scared away the tuners that I called. Most did not even return my calls after I told them what I had…

The ideal customer for a tuner is someone with something like a lightly modded Corvette. These are common cars that are all run by the same engine management system and has a very good base table set from the factory. Tuners will know this car very well and have a good idea of how the car behaves when they start advancing the timing.  Tuners might even charge a flat rate to tune this car because they can do it so quickly. Having a factory ignition table to go off of is a big key to why they like these types of cars – because of this; they have to do very little work… 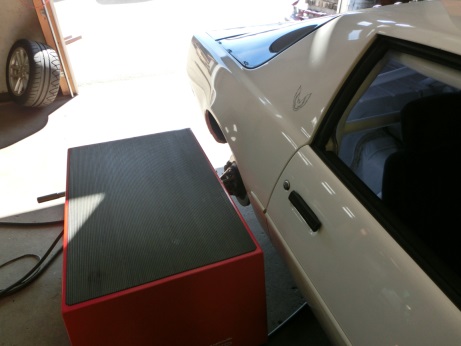 These Dynapack Dyno’s are said to be very accurate since it takes the tire wall out of the equation. But, they can suffer from overheating problems as all that energy has to go somewhere.

What you should know before your dyno day.

Because of the flaky nature of tuners and the risk involved, you should know as much about the tuning process as you can. You should almost be at the level of where you can tune it yourself. It is your duty to know as much about your engine setup as possible. Setting the timing is the hardest part of tuning, and you should have a VERY GOOD idea of how much timing it’s going to take and how sensitive it is to timing changes. You need to go on the forums and check with people who are running a similar setup. If you have a good idea of how much timing the engine is going to take and how sensitive it is, half the battle is won right there. It takes a lot of time to explore how much timing an engine needs, and you may not have a lot of dyno time (or the tuner might not want to spend so much time on your car). If you can set the timing in the ball park of where it will be when fully tuned, this reduces the risk and makes everything easier. Knowing how sensitive the engine is to timing changes will also reduce risk because the tuner should (you better keep an eye on him) adjust how big the timing changes are accordingly.

If you are bringing a car that has a computer system that the tuner doesn’t know, then it will be up to you to navigate the software, so you better know it inside and out. The tuner might not even touch your computer and just have you enter the values.

My personal experience with tuners.

I learned the hard way. I was lucky not to lose my engine, but I did lose some money on a crappy tuner that had no idea what he was doing. After calling around and trying to find a tuner, finally one actually returned my phone call (but only once, it was hard to reach him again). This particular shop, located in St. Charles Illinois, had a ‘consultant’ tuner that was supposed to have some acclaim. After getting the car strapped to their Mustang Dyno and running it up to 2000 rpm, the tuner called it quits after he heard some pops in the exhaust. He then used an IR thermometer on the headers and found some cold primaries which he said were being caused by a miss. They charged me the full price of a tune.

This led my brother and I on a very expensive wild goose chase of trying to find the cause of this ‘miss’. We tore down the engine, analyzed wave forms, replaced the ignition and tested everything multiple times. Everything always checked out. Partially by guessing and partially by reading endlessly on the internet, I eventually found the problem – which was my timing was simply set too retarded and too much fuel was being put in at idle. I learned that O2 sensors don’t read accurately on cars with big cams at idle due to the valve overlap. Lots of overlap allows raw fuel to get into the exhaust and hit the O2 sensor; when this happens, you get a very lean reading which would make you think you need to add more fuel…

Any tuner worth their salt should have recognized this immediately by simply glancing at the ignition table, which is exactly what happened when I took the car to a different tuner. I tried to do as much research as I could on the topic, but I never really found any straight answers. I never really considered myself an engine guy and maybe I was looking in the wrong places and should have posted my problems on an engine builder specific forum. Though, I’m not sure if that would have helped since the usual forums I post on have some very well regarded people and builders.

Because I’m running a standalone computer for my engine, I didn’t have a base table to go off of. I found that your typical tuner is not going to be ready for this as they expect some sort of factory base table. My tuner was surprised when I told him I developed the table myself. Telling a tuner that you have no base table might be enough to scare them away.

On the plus side, there are some calculators online that will generate a base ignition table for you, but be warned that it is going to give you what it expects the maximum timing to be. Since the calculator is strictly theoretical, the max timing may not be close to what the real numbers are as there are just too many factors to give perfect accuracy. Knowing from someone else with a similar setup how much timing your heads should take for the compression ratio and fuel you are using will give you so much more insight to how accurate the generated table is. I used the table generator create my base map, then backed it down quite a bit to be safe. I suggest you do the same and use a dyno to find your max timing.

I mentioned knowing how sensitive your engine is to timing changes is also important. My tuner wanted to throw 34 degrees of timing in my engine right way because most small blocks take around 36. If I allowed that to happen, my engine might have detonated. I was lucky to have read before hand that my heads and compression ratio required much less timing and the max timing ended up being 32 degrees…

Posted in Engines | Tagged before you go to a dyno, Chassis Dyno, deal with tuners, dealing with tuners, dynapack dyno, dyno, dyno tuning, dynojet, How to dyno tune, how to talk with a tuner, mustang dyno, what to know about dynos