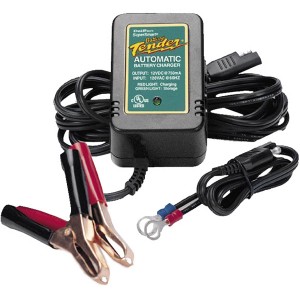 After a few weeks of little use, a friend of mine went out to start his car to find that it was dead. I recommended he get a battery maintainer that he can simply leave on his battery so that it will keep it at full charge. Many people know these as “Battery Tenders” which is a trademarked name.

Problems arise when the battery is left discharged for an extended amount of time. The sulfate coating on the battery plates crystallizes and can no longer go back into solution. This effectively renders the battery ‘done’, and this is why its important to keep your battery fully charged.

Another problem is overcharging. In the old days, chargers didn’t have any peak detection to tell when the they battery was fully charged. You simply set the charger on the the battery for a certain amount of time. If the battery is overcharged, it will build heat and evaporate its water. Eventually the plates become exposed which causes the sulfates to form immediately.

The difference between a battery maintainer and a charger is that a maintainer is designed to be on the battery for an extended amount of time and can detect when the battery is at its peak charge; and once its reached, stops charging the battery. Maintainers also have have a very low amp trickle charge and usually do not have any “quick charge” options. Though, these days many battery chargers have all of these options and can also act as a maintainer. Maintainers can also be weatherproof which is nice if your car is left outside.

Maintainers can be found for less than $20 which is a lot less than a new battery and the headaches that are associated with not being able to start your car. I would definitely recommend one if you have a vehicle that doesn’t see regular use.