I had to post this because Hollywood has tricked so many people into thinking that setting a car on fire will make it explode. What brought this up were some comments I saw on a YouTube video of a race where there was an accident with lots of fire. I thought Myth Busters covered this very well, but I guess a lot of people didn’t see that.

We know that gas is not an explosive chemical alone, and its autoignition temperature is 475–536 °F. It takes quite a bit of work to make it explode: we have to atomize it, mix it with air, compress it, then finally ignite it. But gas just sitting in a tank doesn’t meet any of these requirements. So what does happen when a car catches fire? Well, things like fuel hoses can burn through spilling gas creating a much larger fire. But the Hollywood style explosion that people expect when a car is set ablaze is simply impossible.

Even if a gas tank is near empty and there is a mixture of vapor and air in the tank that somehow catches fire; the best you could get would be a big ‘woosh’ that I don’t think could even rupture the gas tank. The gas tank in a car just isn’t strong enough to build enough pressure to create a thundering sound or grenade-like shrapnel.

So what about the old Ford Pinto (or some other infamous old car) which was notorious for “exploding”?

This is a famous video of the Pinto ‘exploding’, but there is something you should know: this was staged.

The Pinto was notorious for catching fire because some of the cars had bolts behind the rear bumper that were too long. When a rear collision occurred, these bolts would move forward puncturing the tank causing fuel to leak. There was a recall issued for this, and the bolts were replaced with shorter ones.

It’s possible, although very rare, if the fuel tank is placed in a really poor spot like right behind the rear bumper; a hard enough rear impact could cause the fuel to spray out just like the above video of the staged Pinto. If that fuel could find an ignition source while it was still in the air it could make a big fireball. But again, it wouldn’t have any force behind it because its not confined. I think this case is about as close to an explosion as you could get, and no modern car has the tank in such a bad place! 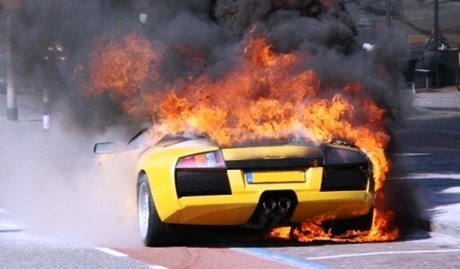 Lamborghini recalled the Murcielago due to a leaky fuel pump. Some of these cars burned, but they didn’t explode!

But don’t get me wrong, gas is still very dangerous stuff and it has been said that a cup of it set a blaze is more than enough to kill someone. Many cars have tanks in excess of 16 gallons, and 16 gallons of gas set on fire is going to produce an inferno.

Unfortunately, many cars do have the potential for creating a large fire. If an impact is hard enough to sever a fuel line and the fuel pump is left running, the pump can drain the tank in a matter of minutes. If the line was severed near the exhaust, the fuel can leak down to it and catch fire – which is then compounded by the pump pouring more fuel into the flames. But, because of this danger, many manufacturers now have an impact sensing switch on the fuel pump that will turn it off in an accident reducing this risk.

The worst part of the myth of exploding cars is that it has prevented rescue attempts when people were trapped or incapacitated in a burning car. The saddest example that comes to mind is Paul Walkers death. The early moments after his crash were caught on video and people were on the scene during that vital time. But no one approached the car out of fear it would explode. Walker’s autopsy revealed that he was breathing after the crash due to the smoke residue found in his lungs. The disinformation and ignorance that movies have created in the minds of the public, which is beyond words to describe, absolutely contributed to the demise of Paul Walker.